The extended hiatus from roller derby due to Covid has me waxing nostalgic about the sport I miss so much, and when Facebook reminded me of my many derby-related memories connected with August 1st, I started thinking about my favorite experiences overall.  I’m nearing my 10th anniversary of involvement in this intense, demanding, and completely amazing sport, so I have collected a lot of good memories over the years (and a few not-so-good memories, but such is life).  I wrote this self-indulgent post to share those moments that stand out–my 10 (mmmm maybe 11) favorite memories from 10 years in derby.  I hope all 3 of you reading this are momentarily entertained by this trip down my memory lane.

#10.  Watching my first derby bout, the Babe City Rollers vs. Northstar in 2010.  What even is roller derby?  I had no clue.  I had never heard of the sport and didn’t know anything like it existed.  I moved to a small town in northern Minnesota from Florida and was way out of my comfort zone.  Then my job started aaaaaand there was a whole financial crisis at the university.  So I had some…feelings to work out.  And here was this sport I had no idea even existed before, and it was somehow perfect.  That first game I watched was amazing.  So I did something that seemed totally out of character to my friends and family: I joined. 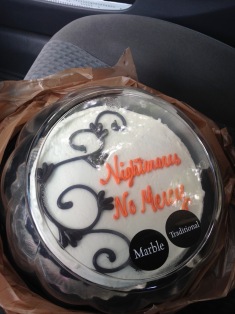 #9.  Playing for the Nightmares on Elm Street in NHRD’s home team championship game in 2014.  When I moved to New Hampshire from Minnesota and couldn’t skate for a couple of years due to an unrelated injury, I was asked to bench manage one of the local home teams.  I had no idea what I was doing.  I remember asking skaters politely if they would please consider going in the next jam.  But the Nightmares on Elm Street stuck with me, and I think I became a pretty decent bench manager.  I bench managed the team for two years and was extremely nervous when I started skating again, went back through rookie training, and went into the home team draft: my team had not lost a game as long as I knew them.  Would they want to draft me, a pretty mediocre skater?  Reader, they drafted me.  And I became co-captain that year, and helped lead my team to another winning season.  That last game of the season stands out because that’s when I started feeling like I was getting a handle on this whole skating thing (only 4 years after starting the whole skating thing).  I finally felt like I was able to do things on the track to help my team.  And we won!  Perhaps in spite of me, but nonetheless!

#8.  Bench managing at WFTDA Playoffs in 2014.  I was asked to manage the league’s A travel team, Skate Free or Die, in 2014.  It was a hard season for the team, for a lot of reasons, but the team did make it to WFTDA playoffs in Sacramento and I went along as Bench Manager.  Gotham was in our division, and at the time they had been dominant for years.  It was pretty exciting to see those skaters in person for the first time (stars–they’re just like us!) and pretty awesome to participate as Manager.  I miss bench managing–I think I was pretty okay at it.

#7.  Playing Gotham (and winning) in 2017.  After I transferred from NHRD to GSRD in 2017, I was drafted to the travel team.  The end of the season ranks among the hardest experiences I’ve had in derby, but our first game was against Gotham’s C team–and we won!  This game makes the list because it was one of those games where it feels like everyone is in sync and everything comes together just right. 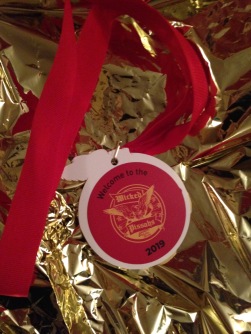 #6.  Getting drafted to the Pissahs in 2018.  Transferring from GSRD to BRD in the fall of 2018 felt risky.  There were a lot of talented skaters joining the league that year, and I had no way of knowing whether I would make it onto a team at all, let alone the team so many of my friends and former teammates were on: the Wicked Pissahs.  Reader, they too drafted me.  Which is good, because Randy’s favorite color is red so he would have cheered for them whether I was on the team or not.

#6a.  Playing with the Common in CT in 2019.  Okay, I’m cheating and adding another experience in here, but this warrants inclusion: in 2019, after playing roller derby together on three leagues and over the course of 9 years, Prissassin and I *finally* played in a game together (on the same team).  This was a double header in Connecticut, and we played for the Boston Common.  This was another game where everything felt like it clicked for the team.

#5.  Getting drafted to Travel Team in 2019.   This one matters to me because it took a lot of work to earn a spot on the team.  I tried out at the start of the season but didn’t get drafted–so I worked harder and tried out midseason.  It felt like a huge accomplishment to make the team.

#4.  Winning a game at All 8 On the Floor in 2015.  We didn’t think we were going to win.  It had been a really rough season for the league–we had a lot of attrition after the 2014 season, and both A and B teams lost every game they played all the way up to this B-team tournament in August.  When we won our night game against Maine, we realized we had not been eliminated from the tournament as we had expected–and then we realized we didn’t have hotel rooms either.  If we had lost, we would have called it a weekend.  Instead, we all drove the hour and a half+ home, slept for about 5 hours, then woke up for our early game the next morning.  I got a call-out on NERDerby for being pretty okay at the whole jamming thing, and all-in-all the game just felt good.

#3.  Playing at ECDX in 2015.  ECDX in 2015 also makes the list of not-so-great derby memories, but let’s just entertain the negative capability for a moment, shall we?  This was my first year at ECDX, and I *loved* the fun pickup challenge bouts: Swedish Fish vs. Goldfish, Flintstones vs. Centrum Silver, Neon vs. Plaid…I played in about 7 fun challenge bouts over the course of the weekend, and had a great time at my first ECDX.  This is why it didn’t suck as much as it would have otherwise when our actual bout was reduced to 5 minutes in length due to an injury on the same track during the previous bout.  So…that was a thing.  To their credit, ECDX organizers gave us not one but two guaranteed bouts the following year.

#2.  Playing our last Pissahs game in 2020.  This is here because it looms large in my mind right now–it was the last time I skated with my team before Covid shut down the league for the foreseeable future.  We really focused as a team, came together, and played hard.  It was a good game.

Bitmoji doesn’t have roller-skates.  Shame on you, bitmoji.

#1.  Playing at BMore Classic in 2019.  These were my first games with B Party.  I was super nervous about skating with the team, but the vibe on the team was excellent and the entire weekend was a really good experience, for a whole range of reasons including being taught how to create my first bitmoji.

Like I said, this list was self-indulgent.  A list of 10 (ok 11) experiences can’t possibly encompass all the good moments I’ve had in the sport or come close to explaining what derby means to me.  I miss derby terribly.  Writing this made me happy but also made me miss it all the more.