This post was first published in the Journal of Victorian Culture Online here. I am very grateful to the Editors for permission to re-publish it here.

Dickens was famously mobile throughout his life, walking miles each day, moving households repeatedly, and traveling often.  “If I could not walk far and fast,” he once wrote, “I think I should just explode and perish.”[1]  This quote describes an obsession with walking, a physical need to walk not only long distances but quickly at that.  Dickens saw walking as essential, writes Rosemary Bodenheimer.  Walking allowed The Inimitable “to bring his books into being, and to calm the effects of his intense engagement with his characters.”[2]  Walking served Dickens’s body as well as the body of his work, we might say.

Like his photographic image (discussed at greater length in Celebrity Circulation I), Dickens himself circulated far and wide.  Unlike the circulation of his image, however, Dickens saw his own physical mobility in positive terms.  The connection between photography and walking may seem incidental or at best metaphoric–a play on circulation and no more.  Yet the incidence of Dickens’s two visits to the U.S. reveals a more material connection.  In spite of Dickens’s wariness of his photographic image on the one hand, and his desire for walking on the other, these two forms of circulation (and the relative lack thereof) together indicate a national difference in the logic of celebrity.

During his visits to the United States, both Dickens’s movements and his photographic image were more controlled–indeed, restricted.  In 1842, his physical movement around the country was more often choreographed for and in some ways withheld from him.  Even during his less scripted visit of 1867-8, his perambulations were limited due to injury and illness.  The multiplication and circulation of his image was also restricted during his second visit when he granted exclusive photographic rights to the New York studio Gurney and Son.  In the United States, Dickens and his image alike moved differently.  This illuminates a difference not only in the way Dickens was regarded as an author, but in articulations of celebrity in mid-century Britain and the U.S.

Dickens’s walking was a way of releasing excess energy, a way of expressing his feelings of “houselessness” (as he put it in an 1861 essay for The Uncommercial Traveller), and a way of seeing.  Dickens describes nighttime rambles as a product of “a temporary inability to sleep,” a “disorder” for which walking to exhaustion was the best cure.[3]  This restlessness was a matter of mind as well as body–an experience of “houselessness” that Dickens professes to experience as an amateur.

The term “houselessness” may seem ironic, considering the man lived in over 20 rented or purchased homes in Britain during his life.  The number of dwellings grows further still when one takes into account the number of extended stays with friends, such as Wilkie Collins, as well as lengthy visits abroad.  Yet this itinerant changing of addresses shares with houselessness a quality of restlessness, a drive towards motion.

This motion–expressed in Dickens’s frequently solitary walks–was denied him during both of his visits to the United States.  During his first visit, Dickens’s dance card was quite full with visits to social institutions, readings, and public engagements.  His itinerary made him stressed: “‘I have no rest or peace, and am in a perpetual worry,’” he declared.[4] 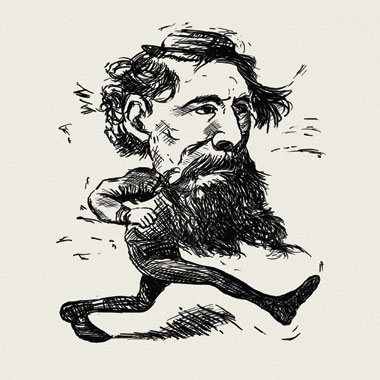 Part of the problem was in the way his movements were highly scripted: as Michael Slater writes in his biography of Dickens, the author “told Forster he could do nothing he wanted to do, go nowhere that he wanted to go and see nothing that he wanted to see.”[5]  He was kept in constant motion, but it was not a motion of his own making: “‘everything public, and nothing private…If I turn into the street, I am followed by a multitude…I am exhausted for want of air.’”[6]  He moved, true, but this movement was restricted and left him in want of private rambles.

During his 1867-8 visit, he took more control over his itinerary.  While Slater writes that “His fierce schedule left him scant time for sight-seeing,” his time was somewhat more his own, which left time for more walks.[7]  As James Fields observes, during the trip “scarcely a day passed, no matter the weather, that he did not accomplish his eight or ten miles.”[8]  Yet his health began deteriorating.  During his visit to New York, his foot hurt him so badly that he could not wear a shoe.

In an effort to boost his spirits, his friends Dolby, Osgood, and Fields helped him plan a “Great International Walking Match.”  Too injured to walk, Dickens oversaw the contest and observed Osgood (representing America) beat Dolby.  Upon his return home to Gads Hill, Dickens’s health improved and his walks resumed.  First by itinerary and then by health, Dickens found his motion restricted during both of his visits to the U.S.

As with his walking, Dickens’s images obeyed a logic of arrested mobility in the United States.  During his 1842 visit, Dickens sat for Francis Alexander’s portrait as well as Henry Dexter’s bust–yet no notable photographic images, despite the fact that daguerreotypy, now in its third year of public practice, was increasingly popular in the States.  Daguerreotype photographers were already bifurcating into two sub-fields in 1840s America: urban studio daguerreotypists and itinerant traveling daguerreotypists.  It does not appear that Dickens was photographed in America until his second visit, when he promised the Gurney studio that it would be the only American studio to record his image during the trip.

Reading Dickens’s walking practices alongside his visit to the U.S. as well as his photographic portraits introduces a contradiction of sorts.  It is perhaps metaphorically ironic that what I am describing as Dickens’s controlled mobility in America coincides with the uncontrolled proliferation of his literary works.  Dickens objected to the “inadequate copyright protection” granted to foreign authors in the U.S.[9]  In practical terms, the absence of adequate copyright protection meant that pirated copies of Dickens’s novels were being reproduced in America and Dickens had no control over their distribution, no financial compensation, and no legal recourse.  While Dickens found himself unable to circulate freely in the U.S., his own literary works were circulating a bit too freely.

In general, Dickens enjoyed walking and did not enjoy sitting for his photographic portrait.  Yet walking in the U.S. was apparently as distasteful for the author as sitting for his portrait, because in each he was forced to confront an unwelcome expression of celebrity.  According to Meckier, Dickens experienced Americans as “overbearing”; they were willing and able to “desecrate a Briton’s cherished conceptions of proper reserve.”[10]  Not only did they exhibit “Selfishness, crassness, and hoggishness,” particularly offensive were the “liberties that Americans took with Dickens personally.”[11]  American celebrations of celebrity were more intrusive, more confrontational, and more familiar.  More restrictive.

This restrictive American familiarity was an outgrowth, Dickens believed, of “the New World’s democratic postulates.”[12]  This democratic expression of celebrity was paradoxically more restrictive than its British counterpart, in that it arrested the movement of its subject.  But move Dickens must, and impositions on this particular type of circulation were egregious to him.  While all of photography was a restriction, of sorts, of Dickens’s control over his mobility, nothing illustrates this restriction more clearly than the Gurney contract.  America, it would seem, wanted to fix Dickens the man and Dickens the image in place–and Dickens himself wanted none of it.

[1]  This popular quote has been blogged and reblogged, tweeted and retweeted, and generally spread every which way around the Internet without citation.  For the quote in a published article, at least, see Merrill Noden, “Frisky as the Dickens,” Sports Illustrated (February 15, 1988).